We all had a very enjoyable day out off Sheerness on Friday the first trip in the Species League from Kent. This trip gave some of the Kent boys a chance to fish the league near to home. The crew – Rolf Marschalek, Matt Osborne, Paul Hart, Alan Bird, Andy Smith, Gary Galbraith and Barrie Senior – England internationals/ European and World champions amongst them – serious competition here.

Being early in the year and fishing in the Thames Estuary, we were sceptical that there would be many species to target, but a total of 7 species were caught on the day exceeding expectations.

The weather was kind with the water almost flat calm, nice bait – rag worm and lug was distributed to the team and Steve had brought some lovely fresh herring for us all.

The day started close inshore with good sport from doggies, pout, whiting and the odd dab before the thornback rays unexpectedly turned up. Steve experimented with a drift near a jetty at slack water where Matt managed a bonus Bass worth 20 points which left us all trying to play catch up , Paul Hart very nearly succeeded.

Steve put us on a dab mark for about 30 minutes and several of us managed to get 1 or 2. We then moved out for the ebb to encounter more rays, dogs , whiting and dabs and Gary Galbraith even managed a small smooth-hound. Really looking forward to the next trip from Sheerness on 13th July. But before that we have other matches in Poole in 4th May, Langstone in 15th June and after that of course there is the  two-day competition from Minehead in 10th and 11th August. Going to be an enjoyable Species League season. 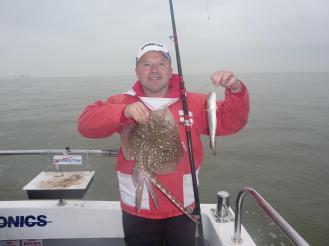